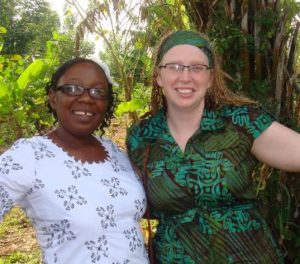 FLOWER was born out of the experiences Helen (FLOWER’s Executive Director) had working as a primary teacher in Asamankese and then in Afranse in the Eastern Region of Ghana. As a teacher Helen encountered many girls who were dropping out of school because of poverty, teenage pregnancy, certain cultural practices and ignorance to the importance of education. Time and time again she could see that staying in school was harder for girls than boys.

At first she started on a small scale, sharing her small salary with some of her students by providing them with money for food, school uniforms, footwear and school materials. Over time this generosity grew to include the school fees of a select number of students as well. She always worked hard to make some time to counsel her students as well, making sure that those having a very hard time had someone to talk to. Although all of her efforts were not wasted she could also see that one person could only do so much, as a result she decided to form an organization that could help many girls and women and the communities that they live in.
As an organization, FLOWER’s first activity was a donation of school supplies to Afranse and Esanse followed by a donation of school uniforms to Asouko-Odumase. After these donations FLOWER then began to support girl child education in the region through visits and support to girls’ clubs in the district. FLOWER would visit schools and organize games and activities on a variety of health and human rights focused topics just for girls. In the beginning FLOWER visited 8 different schools. As of 2012 we have 30 schools that we have managed to visit regularly with the help of interns from the US, Canada, Denmark, Norway, Sweden and Australia.
After seeing the important impact of girls’ clubs first hand, FLOWER began to delve into community workshops that targeted a wider audience, primarily parents with girl children. These workshops continue to this day and have been wide in their scope including the importance of educating our daughters, maternal health, breast cancer screening, malaria, hypertension, healthy living, sanitation, cervical cancer, leadership and women’s empowerment. These workshops have been an important avenue for FLOWER to understand the communities that we work with better and to build a good reputation and trusting relationships.
Since 2009 FLOWER has also began to dabble in additional formal programming, including community clean-ups and livelihoods training programs (so far cooking, liquid soap making and batik making have been studied). We have donated litter bins to ASASCO and St. Thomas Secondary Technical School.
Throughout all of our work the Municipal Assembly, Municipal Health authority and the Ghana Education Service have been integral to our success. We have learned so much from our community and institutional partners so far.
Since 2007 FLOWER has been operating in the Eastern Region and registered officially for the first time with the Registrar General and Social Welfare Office.
In 2009 FLOWER joined the coalition of NGOs in Health and NGOs in Malaria and remains a member in good standing.